White noise refers to any unchanging sound that is just there in the background. But it is actually a scientific term that most people don't understand.

What is White Noise?

White noise is technically an effective way to drown out external sounds that could potentially disturb or disrupt the sleeper from entering into the deep REM (rapid eye movement) stage of sleep.

White noise is known to stimulate sleep in humans and is used as a remedy for sleeplessness. However, for some people, white sounds can trigger a higher sensitivity to the noise and aggravate their insomnia.

White sound consists of random signals with constant variation without any specific mean. A sound may be considered white noise if it has a flat frequency spectrum across its range of audible wavelengths.

White noise is usually associated with blabber­ing without substance.

Applied mainly in engineering and maths, white noise has numerous benefits for humans. White noises are usually associated with static, often heard over the telephone or television in unwanted frequencies.

Natural sounds like sea waves, heavy rain, thunderstorms, cracking of fires, strong winds, chirping birds, and nighttime sounds are some of the most common types of white noise.

How White Noise Affects Your Sleeping

Most of us today have a problem falling asleep or staying asleep. At first, it might seem strange how noise can cure your lack of concentration to sleep.

However, the fact is that white noise blends into your external sounds and drowns them out. This means your brain loses its ability to stay awake and focused for long periods of time. Ideally, it drifts into a deep sleep.

White light is usually used by those who want to control and ensure their deepest sleep.

It’s mainly because the sense of hearing functions, even when we are sleeping, and there is no natural white noise or increased disturbances around us, can wake up the sleeper.

The ways how white noise affects your sleep include

To fully understand white noises, you need to know that they don't drown out external sounds; instead, they mask them by superimposition.

To understand this, think of the example of “light.” If someone flashes a torch during the daytime, most people won't even realize it, but if they flash it at nighttime, almost everyone will see it.

Sound masking of white noise is extremely useful for people who live in noisy environments, where there are too few external stimuli to inhibit their sleep.

Tinnitus is defined as the constant and persistent noise in the ear. It is a major disturbance to sleep. About four million people suffer from tinnitus in the United States, so there is a high need for relief than treatment.

Most tinnitus patients, they're given white noise generators that mask the sound outside their ears and from within.

White noise is a broad band of frequencies, employing linear masking of all frequencies in and around it

Even if your environment is the best, technology overload during waking hours can greatly hinder your ability to get quality restorative deep slumber.

White noise helps mask the other noises in your sleep stage I and through the rest of the night until you reach sleep stage IV or REM sleep.

Even if you usually wake up during the night or disruptively sleep, the white noise will ensure that whenever you awake, you will also be able to go back to sleep easily!

Because the broadband of white sound is constant throughout the entire night, there is no variation in the external stimuli that could disturb your deep sleep.

Shuts Down the Brain

Sleep is not definite (for everyone). Regardless of whether you have a regular sleeping pattern, it is the experiences you experience during the day which dictate when you fall asleep.

Most people remember their daily activities during waking hours and tend to recount the tensions and stresses they experienced throughout the days, which prolong sleep.

Regardless of how your days were or what your hectic schedule is, white noise can help you relax quickly, easily, and without stress

If your stress is too much for you, try to meditate on white noise before going to bed.

By masking the external sounds with white noise, you ensure that even if you awaken, it will go unnoticed and you’ll fall asleep again at godspeed.

Most people complain about not having enough deep sleep, and white noises can certainly be helpful!

Sleeping is a restorative period for our bodies; if we skip the REM stage or deep stages of sleep, we won't be able to restore ourselves properly.

White noise keeps you in your deep sleep because it prevents your brain from fully waking up.

Sleep disorders are often caused by an improper sleep cycle or circadian rhythm.

White noise helps regulate deep sleep every day, but it also helps stabilize a uniform length of sleep and the repair and regularity of your sleep cycle.

As soon as you start using white noise to help you fall asleep and stay asleep, you're beginning to discipline yourself for sleeping.

Good sleeping habits are important for good health. If you experience too many interruptions to your normal sleeping patterns, it may be a sign that something is wrong.

It is not meticulous for someone to realize that their sleep is awry and requires repair, but most people rarely recognize the seriousness of the problem.

Furthermore, with this white noise, sleeping is instant. There are some ideal methods for using white sounds.

You can easily create a portable and costless white sound generator for yourself by using the Chrome web store.

There are many applications available for creating white noise, but some of them include options for regulating your sleep using binaural beats that you can adjust as well.

With 10 individual sound effects available at once, Relax Melodies has everything from humming to thunderstorms, rain, wind, music boxes, and even crackles and purrs.

They're usually used for playing the pink or other deviant types of noises than the rough white type. Check out another interesting white noise app called White Noise by TMS Software.

The innocent-seeming fan emits white noise consistently when turned on and creates a constant blanket of sound.

Any fan, ceiling, desk, or wall mounted, provided it isn't silenced, is an ideal replacement for a DIY white-noises generator.

Air conditioners tend to be better at masking sounds than fans, so they're the best DIY white noise generators for your home or hotel.

The crackling sounds from an active fire are white sounds. If you're outside, besides the crackling fire, sounds around will trigger the relaxing natural white noise.

If it is difficult to make a fire, just play the crackling sound from the app mentioned above.

A typical white noise machine usually plays the sound of waterfalls, seas, or winds rustle­ing through jungles. Hence, it gives off a softer hue of white noise compared to the harsher one.

There are various types of white noise machines available depending on your needs. They include sleep aids, power naps, sound masking, audio tests, etc.

Many white noise machines are available for purchase, ranging from simple devices with basic features to high-tech models with advanced features.

The fundamental function of the white noise machine is by moving the air through the machine casings, which results in the white type of noise.

An FM tuner is another significantly easy way to create white noise. Tune your radio until it has reached halfway between stations, then keep it there. Make sure it is tuned to a white sound that you like.

You can often get a soothing sound to any color of sound from a radio.

Don't use a TV for the exact same reason, because the light from the television often flares and disrupts sleep!

Another useful and almost free way to generate white noise is by using any cassette or YouTube video that provides white noise.

There are so many videos online that provide almost every color of noise that it is easy to find something that you enjoy and triggers your sleep.

You can even combine the natural environment noises with your choice of music without vocals to produce a mixture of white noise and record them too with White Noise MP3s! 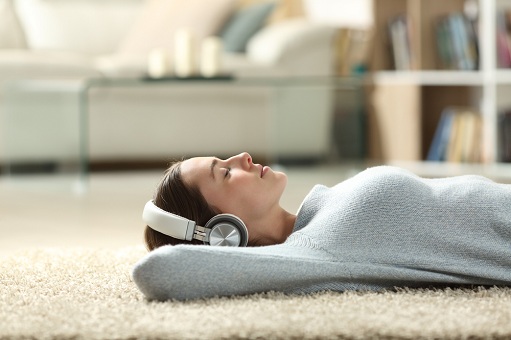 While the individual realization of the white sound may be able to give an unexpected shock, there are medical uses of white sound to improve your life and its biological rhythms for better sleep.

It seems strange at first, but white noise is used in all kinds of media, from movies to music, for decades. When birds chirp or when machines run sounds on-screen, there will be white noise.

White noise is often masked by other sounds, but it can be heard when listening to music like EDM.

It also helps in sound design to renovate the effect of percussion, that of drums or snare with higher frequency.

To monitor the acoustics of a concert venue or any other space for acoustic purposes, audio engineers often use white to pink noise.

Noise is generated at different points in order to determine whether there are any unfavorable results to the entire room.

Pink noise is often employed when testing speakers and similar audio equipment because of its high-frequency spectrum.

Aside from tinnitus, white noise is also significant for medical purposes because of its effects on ADHD patients, according to a recent study.

White noises were found to improve the cognitive abilities and alertness of people diagnosed with ADHD, significantly.

Studies show that white type of noises is helpful for babies who suffer from a sleep disorder.

First, white noise can be modified for different cognitive tasks.

White noise has been shown to be effective for people suffering from attention deficit hyperactivity disorder (ADHD). It can help improve their concentration at work too.

It also helps improve the mood and logical reasoning ability of a person.

It is often employed in white noise vectors as well as continuous-time white sounds.

As white sound significantly enhances sleep for a baby to a man, it is necessary to utilize it to discipline your sleep cycle at first.

As babies learn to fall asleep, they start out with a blank slate for sleeping patterns. You can also gradually train yourself to relax and meditate on white noises initially.

The truth is that the uterus is a noisy place next to the stomach and zillions of other tiny to large internal organs, we've been taught to listen to white noises since the very beginning.

For babies, it is best to use white noise for a short period of time rather than continuously playing white noise, because it limits their ability to respond to other sounds.