Sleep apnea is a condition where someone has trouble breathing during sleep because of a temporary blockage in the upper airways. Because sleep apnea usually shows up when people are sleeping, it is difficult to figure out exactly why they're having trouble breathing.

When someone breathes, they breathe in oxygen and then expel carbon dioxide through the upper airways. It keeps your metabolism active by keeping your body well-oxygenated. When there is an obstacle in the upper airway, inhaled breath is compressed, which causes the sound of snoring to occur. It wakes up someone from a deep sleep into a state of drowsiness.

However, Apnea happens when the airway becomes completely obstructed and breathing ceases for several seconds to a few moments. This sends a distress signal to the brain while the rate of oxygen decreases in blood and the person is drawn awake from a light sleep by the brain.

This usually ends up resulting in a gasp or choking response when they wake up, opening their airways, and resolving the air blockage. As long as the person continues to go through this obstructive sleep apnea pattern, he will continue to experience these episodes every hour on average.

Sleep disorders are often not diagnosed, nor are they analyzed for their sources. Furthermore, if this kind of sleepiness is not treated immediately, it may lead to serious health complications including cardiac arrests, strokes, congestive cardiac failure, and arrhythmia.

Below are some of the symptoms of sleep apnea:

Point 1 through 10 lists the milder symptoms associated with sleep apnea, while points 10 through 15 constitutes the more severe symptoms that require immediate medical attention. If you suffer from one of these, go see your doctor right away.

How Do You Get Sleep Apnea? 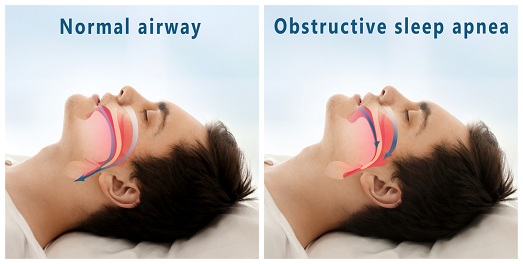 Sleep apnea occurs when the upper airways close too tightly during sleep. It may be caused by overly relaxed muscle tone or serious medical conditions. However, it is important to know that there are many other factors, apart from obesity, which contribute to the development of chronic sleep apnea.

Masculinity or being a man

In Pierre Robin Syndrome, the smaller jaw structure causes the tongue to automatically fall back into the throat and obstruct the passage of air.

People who are overweight and obese are four times more likely to suffer from obstructive apneas than people with normal BMI.

Obesity causes deposits of fat around the upper part of the throat, which blocks the flow of oxygen and causes sleep apnea.

Genetic history affects people to be born with a deviated septum, which makes them more likely to suffer from sleep apnea in the future.

Smoking reduces the fluid-retaining abilities of the upper airways, which causes inflammation in the throat.

If you've found out that one of these reasons has caused your body to develop sleep apnea, then you need to see a sleep doctor right now to help you eliminate the fatal illness of sleep apnea.

Keep an eye out for our exclusive content on health and wellness!