ChiliSleep’s Cube mattress pad system is an excellent bed-cooling system for anyone who suffers from hot flashes, a high metabolism, or generally sleeps hot.  And the Cube’s heating mode is a great way to keep toasty warm on cold winter nights.

The Cube’s Dual-Zone option is a Godsend for couples who prefer sleeping in different temperatures, so you can kiss your evening thermostat battles goodbye.

Unlike less expensive bed-cooling systems, the ChiliPad Mesh mattress pad is large enough to remain in contact with your entire body while you move around at night.

Because it is a water-based system, the Cube provides the most precise thermal control and the widest temperature range of any other bed-cooling / -heating system sold today.

A dual-zone option is available that allows each partner / side of the bed to maintain its own climate.

Each zone can be set to maintain a temperature between 55F and 100F and can keep your bed up to 15 degrees F cooler than the ambient (room) temperature – the best in its class.

Save 20% at ChiliSleep
See Price on Amazon

Do Not Buy The Cube If:

How ChiliSleep Cube Heats and Cools 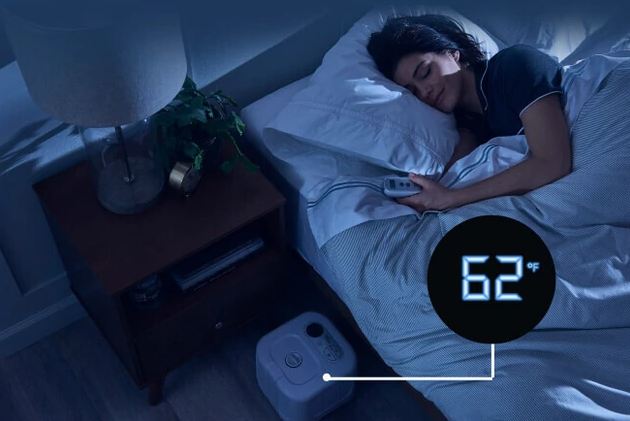 Many bed-cooling/heating systems such as the BedJet use forced air to keep you comfortable.

The ChiliSleep Cube, on the other hand, uses water to heat and cool your body through direct contact with a pad fill of water tubes.

The Cube heats or cools the water in its Cube base unit, then circulates it through the silicon micro-tubes inside the ChiliPad Mesh mattress pad.

You set the desired temperature using the buttons on the base unit or via and the remote control.

Surprisingly, the unit does not include an adjustable timer or any scheduling options, a popular feature today for most cooling or heating pads.

The water that flows through the tubes can reach a temperature of up to 110F to warm the body and bed and go as low as 55F to keep you cool.

Dual-zone packages are available for Queen, and King sized beds.

One Cube is included for each side of the bed and is individually controlled so each partner can set his/her own temperature.

Our Experience Using The Cube

During late Spring in the Deep South, we tested one ChiliSleep Cube system and a single ChiliPad Mesh pad on one side of our king-sized bed for a week.

The pad covered about 90% of the length of our California King, and it was plenty wide enough for a 6'2” man to sleep on his side in a fetal position and still be completely on top of the pad.

The included mattress pad straps did a fine job holding the pad in place all night.

After the first minute or two, we didn't notice the mattress pad under our fitted sheet, but we did notice a pronounced cooling and heating effect.

We tested our system during the late Spring (we live in the Deep South) in both cooling and heating modes.  We adjusted the thermostat each night to simulate a hot or cold night in our room.

When heating, the Cube’s mattress pad feels pretty much like any other heating pad, except that you can fine-tune the temperature – unlike an electric heating pad, where you might only have 3-4 settings.

When cooling, we were able to prove that the system can indeed cool up to 15 degrees lower than ambient temperature.  This is better than the BedJet we tested later in the summer.

That said, the cooling effect is only on your backside, so the Cube doesn't really have the same evaporation effect as a fan blowing over your body.

So if you sweat at night like one of us does, then you will feel cooler and sweat less but your body will not necessarily feel drier.

A few customers have reported that the tubes can be felt a bit on their backside, but for the most part it didn't affect their sleep.

Contrary to those reports, neither of us felt the tubes in the ChiliPad Mesh pad.  We are not that heavy, however, so this might explain the difference.

Or maybe it's because underneath the poly-cotton padding, the silicon water tubes are small and soft.

ChiliPad suggests putting the pad underneath a fitted sheet to keep it in place and make it more comfortable, which is what we did.

The only maintenance required for the Cube is to keep your water fresh and clean and to wash/dry your mattress pad periodically.

To keep your system’s water clean, the company recommends that you add 1/4 cup hydrogen peroxide to the Cube’s water reservoir.

ChiliSleep’s newer model, the Ooler, avoids this by using a UV light in the system to protect your water from bacteria and other biologicals.

The mattress pad should only be washed in a front-loading machine. For drying, use a gentle cycle on the ‘No Heat” setting. 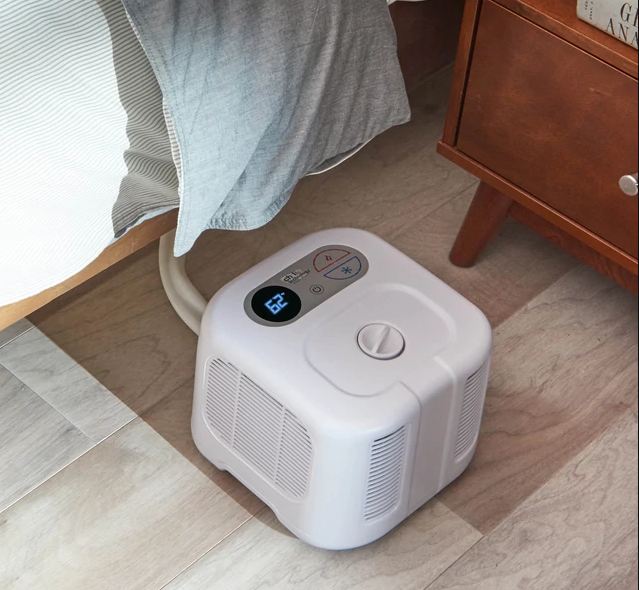 Setting up the system was really straightforward and took us about 15 minutes.

You need to place the Cube on the floor near your bed on a firm, flat surface so water levels are in the right position.

To allow for unrestricted water flow, make sure you have at least 24 inches clearance around the device.

Before turning on the Cube, you will need to fill the reservoir with water and attach the hoses.

Distilled water should be used to prevent mineral and biological buildup.

If you use tap water, then your Cube will need to be cleaned regularly. Too much mineral buildup will damage the Cube by clogging the tubes.

The ChiliPad Mesh mattress pad is placed under your fitted sheet and on top of your mattress.

The included strap is used to attach the mattress pad to prevent it from moving when you sleep.

The tubes can easily be punctured and are soft, so you need to keep sharp objects away.

The ChiliPad is safe for your pet, but you need to ensure that claws don't damage the tubes.

To protect your mattress from potential leaks, we recommend placing a waterproof mattress protector underneath your ChiliPad Mesh pad. 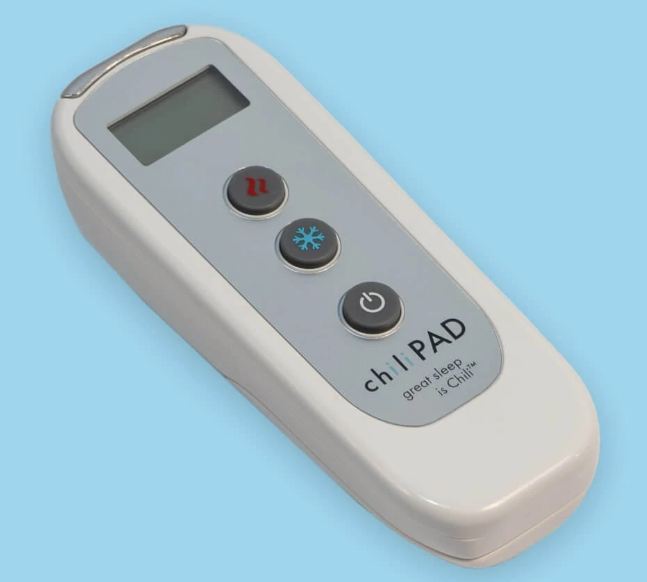 The package includes a very simple wireless remote control. To use the remote, you need to pair it with your cube.

After plugging the Cube in, hold the ON button down for 5 seconds. The display will read 888. The Cube will pair automatically when you press the ON button. A short beep confirms that the cube is paired.

Three buttons are available on the remote control: ON/OFF, cool, and warm.

If the remote control malfunctions or the battery runs out, you can use the buttons on your cube to access the same functions.

Using the cool and warm buttons, you can adjust the water temperature from 55F to 110F in one-degree increments. After 10 hours of constant operation, the Cube will turn itself off automatically.

There is no timer or scheduling function, which is a major shortcoming vs. other systems in this price range – like the BedJet.  If you want this flexibility, you’ll need to upgrade to the Ooler, the newer model made by Chilisleep.

Overall, we found the Cube to be quiet when operating. The noise did not cause us problems with falling asleep nor did the unit’s operation wake either of us.

If you see reviews complaining about bright lights coming from the unit, ignore them – the company eliminated the annoying lights on the new Cube. They still light up when touched, but then dim after a few seconds. 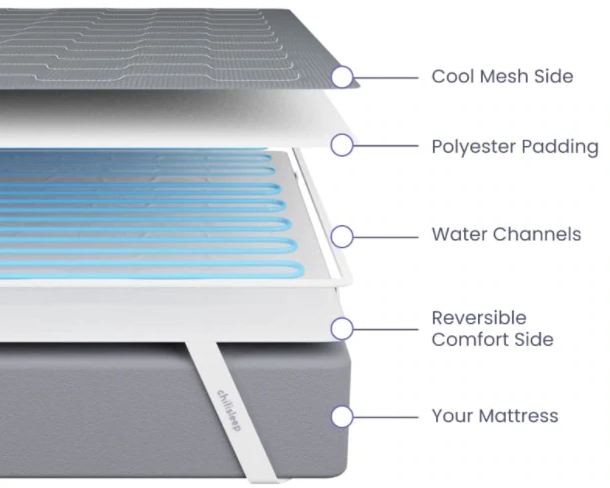 The ChiliSleep Cube is best used in a room that has a moderate temperature. Don't completely turn off your thermostat on a hot and humid summer night. This unit can't replace whole-room climate control.

The Cube will usually reach the desired temperature in a matter of minutes once you have set it. However, the final temperature and speed in getting there is affected by humidity and ambient air temperature.

The Cube heats to the desired temperature at about the same rate as a traditional heating pad. We recommend turning it on about 10 minutes before retiring to bed. 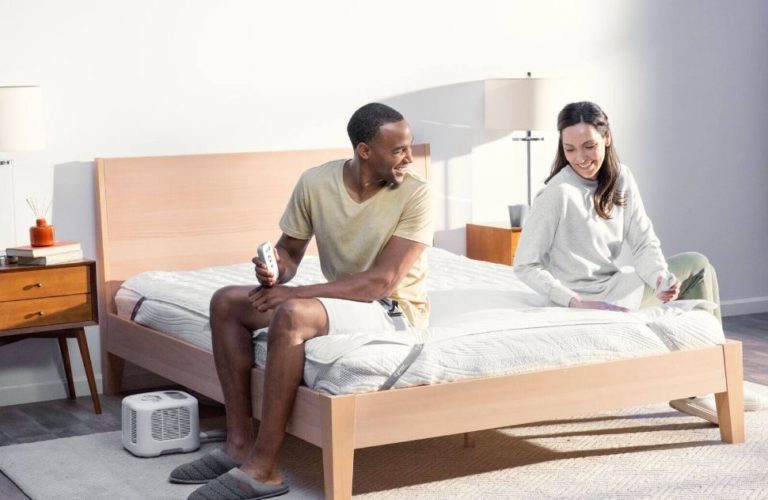 We would have given a lower score to the first-generation ChiliSleep Cube. However, the company has made improvements that cleared almost every nagging issue away.

The current Cube is faster and easier to use, makes less noise, and doesn't emit annoying lights all night.

The dual-zone option is an excellent solution for couples with different sleeping preferences.

Setup and remote control operation could not be simpler.

To keep it simple, the latest ChiliSleep Cube is an excellent solution for anyone who needs to keep cool at night and want the most precise control possible over the temperature of their bed.

That said, ChiliSleep's Ooler system is even better and gives you more control over how and when you use the system during your night's sleep.

If you have a few extra few dollars to spare, then spring for the Ooler instead.

The mattress pad and tubes come with a 90-day guarantee. A 2-year warranty covers the Cube and control unit.

All products come with a 30-day money-back guarantee.

Where To Buy The ChiliSleep Cube

We recommend purchasing your Cube system from ChiliSleep directly to get the best deal.

That said, the system is also sold on sites like Amazon.com.  Just be careful about protecting your warranty when buying from any third party.

Save 20% at ChiliSleep
See Price on Amazon